Jump to content
From ArmA 3 King of the Hill Wiki 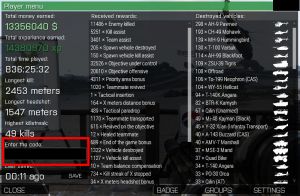 The player menu is an in-game menu, which provides different functionality to the player of King of the Hill.

The menu can be access by using the scroll-wheel action, or the ~ key (the key next left to the 1 key, on a german keyboard the ^ key).

Within the player menu, the player has different functionality. Some of them are only informational:

Apart from the informational parts, the player menu allows also to:

The player menu allows the player also access to some settings. Within these settings, there's the limited possibility to change the view distance of the player (which is the upper boundary of the game settings view distance), as well as:

Retrieved from "https://www.armakoth.wiki/w/index.php?title=Player_menu&oldid=94"
Category:
Cookies help us deliver our services. By using our services, you agree to our use of cookies.