The spawn vehicle is a new additional feature with the v14 update of the King of the Hill mission. With this vehicle, a faction can get faster and more independent from the usual ways of getting into the AO (like helicopter flights or driving inside the AO). 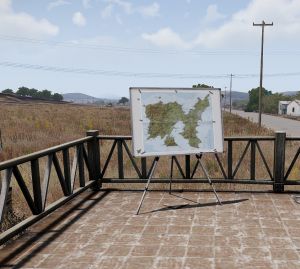 Using the scroll wheel at this map while a spawn vehicle is available in the AO, allows a player to spawn directly into that vehicle.

However, there is a timeout when spawning, which is a server setting but usually around 2 minutes. This measure protects against spamming people into the AO and balances the spawn vehicle against other logistical support, like helicopter pilots.

Spawn vehicles of the factionsEdit

All factions have the same vehicle, an AFV-4 Gorgon as a base for their spawn vehicle. The vehicles are unarmed and colored in the factions main color (green for INDEPENDENT, red for OPFOR and blue for BLUFOR), and are additionally recognizable by a flag at the left end of the vehicle. Also, the Gorgon is an amphibious vehicle, which allows it swim through water.

A bit of history, before each faction had the same spawn vehicle, they had different ones:

If the vehicle is going to be destroyed or despawns as it was too long out of the safe zone and AO, the vehicle will respawn at the safe zone of the faction it belongs to. It does also automatically respawn if it is too damaged, however, the time until it despawns is way longer, so it may make sense to destory your own spawn vehicle.

The time the vehicle takes to respawn is variable and seems to be related how long it was able to be used within the AO. If it was alive in the AO longer, it will take longer to respawn as well.

The spawn vehicle gives a faction a strategical advantage over the other factions, as deploying infantry is much faster and easier. It also allows the unnoticed insertion of infantry into a specific area of the AO, which is potentially unknown to the enemy factions (e.g. given the spawn vehicle is properly hidden).

These strategical advantages makes the spawn vehicle also a high value target to the enemy factions. Even given the reward of destroying it is rather low compared with other vehicles (as of end of 2020: 500 XP and 500 $). Parts of a faction usually are specifically looking for possible spawn vehicle locations in order to mark it for their own team (to intercept spawning infantry supply) or to destroy the vehicle all together.